The Jamzu Daily Double on Touch Arcade started off with a bang, with the two positions below.

POSITION ONE Red to move with a one. 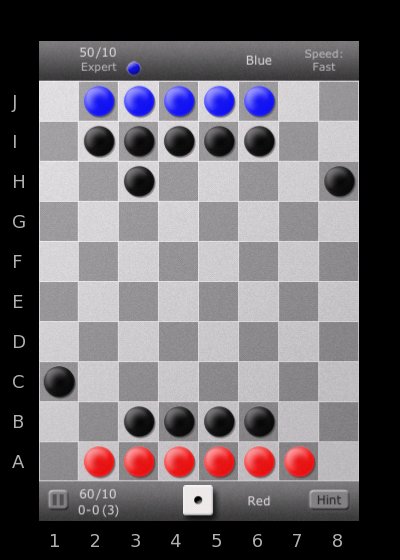 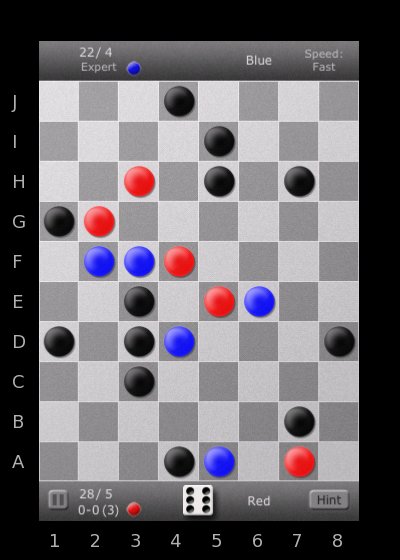 Several players guessed A7, incorrectly, for the first position best move. The fully open lane 7 was deceiving, and at first no one saw the better move at A2.

Finally, in the second round, haffertee came through with both best moves, and won the first day’s prize!

Here are my reasons for the two best moves:

(2) B7-B3 is the overall best here. You need to open the lane 7 runner and take control of the lane. Getting this runner a chance to escape now is best. The G2 runner can go some other time, and is not in any danger of being blocked.

After the contest was over, Khamous PM’d me with some very persuasive logic for B3-C4 as a potential better move than A2 in the first position. The gist of his reasoning is that you get three open lanes with this move, that you can potentially move forward in lane 3 where Blue is already double-blocked, and then attack behind in this lane, and that B6-C5 is not as strong because Blue can also open in lane 6, potentially getting free.

Looking at this idea more, though, I thought if Blue was lucky and got a 6 next roll, the possibility of I4-C6 made Khamous’ suggestion too dangerous. But Khamous stuck to his guns, and backed up his reasoning even more. At this point, I agreed that that B3-C4 could be stronger, but it would take a lot more analysis to sort it out fully.

It was a great start to The Jamzu Daily Double series, and everyone is looking forward to the second round, Tuesday (tonight) at 9pm ET!