The fifth day of The Jamzu Daily Double on Touch Arcade featured two challenging positions whose best moves had a similar theme – blocking Blue in an open lane. 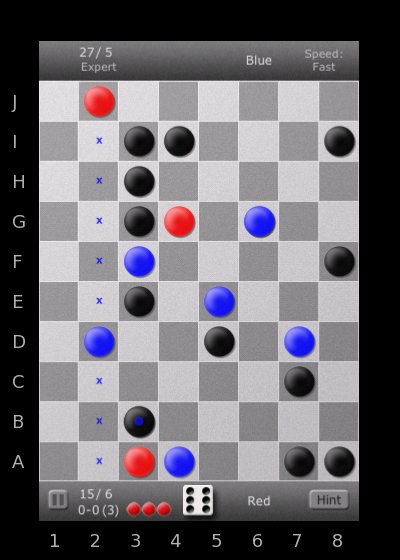 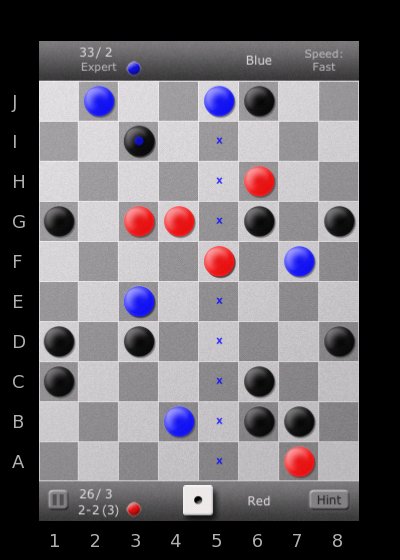 This time up, CzarCastic struck hard just a couple of minutes into round one, with the correct guess on position one, I4-E6. Several players, including previous winners haffertee and Khamous, went for the more obvious, but incorrect, H3-B5 with their first guesses.

No one, however, saw the best move G1-H2 for position two in the first round. After I PM’d the first round players with their results, I opened the second round.

With the move I4-E6 out of the bag, I had a feeling the win would happen quickly. Sure enough, haffertee and Khamous were like lightning with correct guesses in the second round. Khamous managed to barely edge out haf on the clock, taking his third victory in the Daily Double series! Khamous proved his Jamzu Move Champion 2010 title was well-earned.

The first series of the Jamzu Daily Double was a total blast, and we want to send out a huge “thank you!” to everyone who participated in these challenging contests.

Everyone is looking forward to series 2 of The Jamzu Daily Double, set to start on March 24!

Best Move: I4-E6
– Unblocks Red and blocks Blue.
– Opens lane 4 for a potential good run or move off.
– Blocks Blue, in the most effective way possible, in lane 6, where he is threatening to make a long run.
– The E6 block will be very hard for Blue to flip back against Red.

H3-B5
– Does unblock Red and blocks Blue.
– But does not open any lanes for Red.
– Easy for Blue to flip this block back to Red with B5-D3. Blue couldn’t do this as long as you controlled lane 3, but there is no need to force yourself to do that right now.
– Better to pass on H3-B5 right now. Instead, do I4-E6 first to stop Blue in lane 6 as much as possible, and if you get the chance later, then do H3-B5.

– This opens Blue in lane 3 too much and too early.
– Blue’s lane 5 runner is already blocked, not much gained with this.
– No open lane for Red.
– Leaves lane 6 wide open for Blue.
– Blue can move ahead in lane 3, and even block behind his lane 3 runner with the D5 and C7 jammers if he has the chance.

Best Move: G1-H2 or G1-F2
– Blocks Blue from making a run for it in lane 2.
– G1-H2 blocks Blue the tightest, but also bottles up the I3 jammer a bit for Red.
– G1-F2 blocks Blue partially, but does allow the possible follow-up of I3-H2 if Blue doesn’t get past I2 in lane 2.
– Overall, these two moves are equally good.

B7-A6
– This does open lane 7 for Red.
– Better to wait for something that would allow you to block Blue in lanes 2, 3 or 5 with this jammer.