The third day of The Jamzu Daily Double 2 on Touch Arcade featured two incredibly wicked positions, and a real battle that went into the second round. (The second day of the JDD 2 was the Thursday Triple Twist, which concluded on Sunday.) 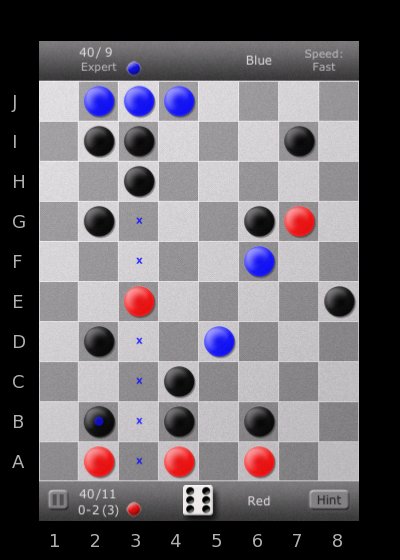 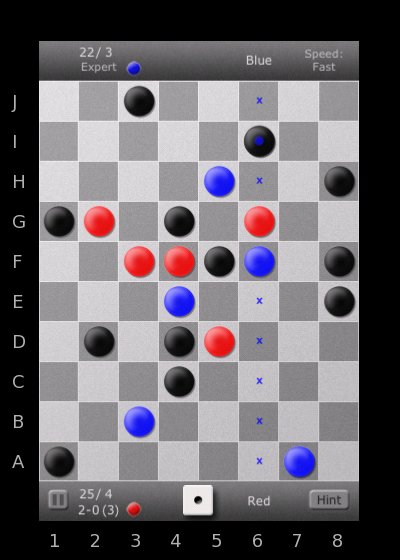 Khamous was first to strike, with cathy and haffertee coming in with guesses right behind. But none of these players had posted a correct move. A couple more minutes passed, and then TheSporkWithin finally struck, nailing the tough-to-see move in position one, with G6-I4! Khamous posted that he thought Spork had won it with this guess, but I don’t think any of the players yet suspected what was hidden in the ultra-devious position two. When I waited a couple more minutes to call round one, everyone caught on that the right move for position two had not yet been posted, and the suspense got very intense for the start of round two!

Finally, after sending out the PMs, I gave the GO! for round two, and Khamous and Spork both posted almost instantly with the correct answer for both moves, with Khamous edging out Spork by a microsecond with the correct guess of F3 for position two. These two posts were so close, and the reason for F3 was so important, that I made a quick decision to have a tie-breaker for the day’s contest to make sure luck wasn’t the deciding factor. I asked both Khamous and Spork to PM their reasons for F3 in position two.

After the first PMs were in, it was clear that Khamous had absolutely nailed the best reason for F3 (see analysis below) and Khamous was crowned the winner for Day 3! Khamous’ perfect logic for F3, which he was able to write quickly under the intense pressure of the PM tie-breaker, was posted in the thread for all to see.

A $15 iTunes Gift Card was given away to each day’s winner! New players are welcome to join the Jamzu Daily Double any time.

Best Move: G6-I4
– Unblocks Red and blocks Blue and Red. (partial block switch)
– Blocks Blue where he currently has a wide open lane, preventing a potentially long run by Blue.
– Takes control of lane 6. Red could then continue to free his lane 6 runner with a move like B6-C5. Or he could keep attacking Blue in lane 4, with something like I7-H4.

– These are all good moves in different ways that are very similar to the best move, but missing the best possible way to block Blue at I4, and the really nice block switch that G6-I4 provides.

Best Move: F3
– A critical defensive move by Red! This prevents D4-G3, D4-H4, D4-I5 or D4-J6 by Blue. Any of these moves would be a total block switch by Blue, hurting Red in blocks where he is already behind.
– Allows the G4 jammer to potentially be moved by Red later to both open lane 4 and possibly attack Blue with G4-A4 (if B3 is out of the way)
– Really the only move the helps Red at all, but it helps tremendously by blocking a potentially killer move by Blue.