For Day 4, The Jamzu Daily Double 2 on Touch Arcade featured two positions with rolls of 4, and two jammer moves as the correct answers. 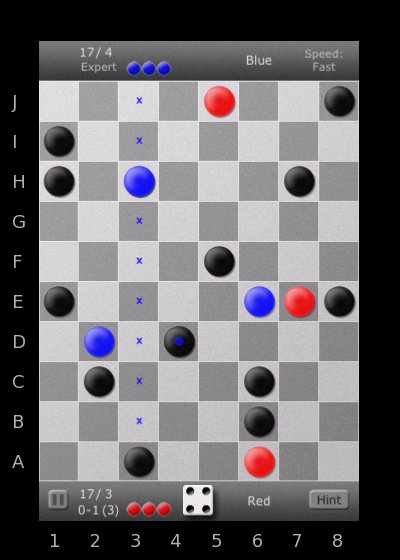 POSITION TWO Red to move with a four. 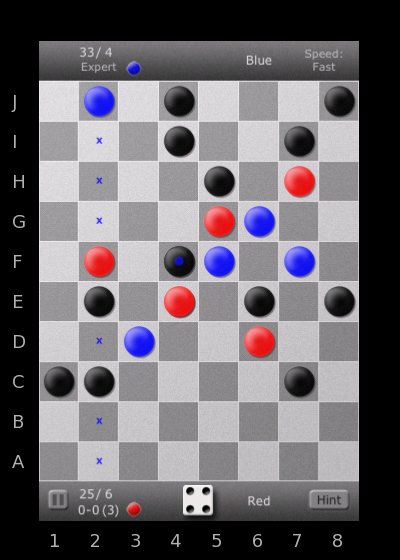 Khamous was up first with his guess, but missed on both boards, going for the deceptively appealing F2 run in position two. cathy struck just a minute later, with the right move for position two, I7-E5! There was a two minute pause, and then TheSporkWithin came into the game, striking gold with the best move for both positions! C6-A2 was the correct answer for position one. Congrats, Spork!

After the contest was over, Spork said “Nice, my 5 minute bathroom break tactic paid off!” and revealed that the only way he was able to play was by excusing himself for a moment from a family event to enter the contest by playing from his phone! An extra bonus point to Spork for pulling off this tricky maneuver to win the contest.

Khamous and I got into a lengthy discussion of the merits of C6-A2 vs B6-D6, but I’ll leave the analysis below as the final word for now!

A $15 iTunes Gift Card was given away to each day’s winner! New players are welcome to join at any time.

Best Move: C6-A2
– Unblocks Red and Blue and blocks blue. (partial block switch)
– Helps unblock Red’s vulnerable runner in lane 6.
– Takes control of lane 6, allowing another potential move where Red could both free himself while counter-attacking Blue in lane 3.
– Keeps Red ahead in the block count, 4-2.
– The Blue runner on E6 is a good as gone. Blue weaknesses are his lane 2 and 3 runners. Red’s C6-A2 attacks those weaknesses while simultaneously improving both his position and advantages.

B6-D6
– This does give Red control of lane 6, and stops Blue from moving to D6.
– But does nothing to ultimately help Red get free.
– Red is going to have to get the B6 and C6 jammers out of the way. Moving B6-D6 like this does not really get Red anywhere, and wastes a valuable tempo.
– Red needs to get out of his trap in the way that maintains or improves his advantages. C6-A2 both helps Red free himself, and increases his advantage in blocks.

F2
– Does get a runner off
– But not necessary now. F2 is in no danger of being blocked, and can move forward later.

E6-A6
– Partial block switch.
– Not good timing for this move.
– With this move, Blue now has a good shot at jumping Red in lane 6