The first day of The Jamzu Daily Double 2 on Touch Arcade featured two positions with tricky jammer moves, two players with lightning fast correct answers, and a new winner in the JDD series! 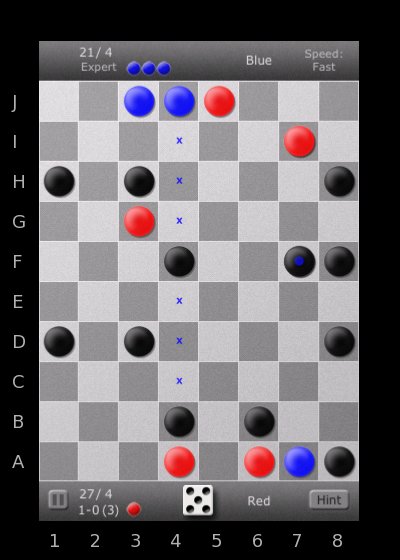 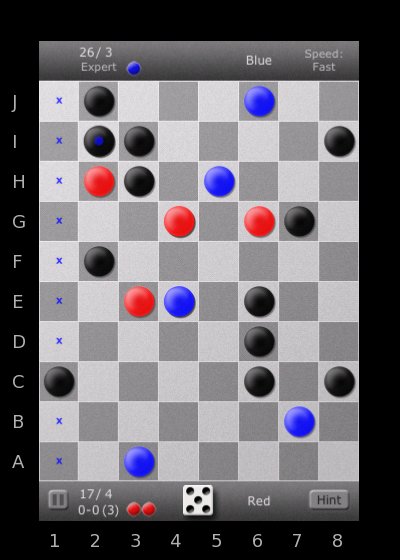 TheSporkWithin, taking a brief moment away from World of Warcraft, came in blindingly fast, and first, with both correct moves! B6-C3 for position one, and H3-C4 for position two. Big congrats to TheSporkWithin! Just a step behind, seang also had the right moves for both positions. I was shocked at how fast these two players had gotten these moves, with the move in position one, I think, being especially hard to spot. Khamous, the Champ from the previous two contests, came in with the first answer, but only one correct move at H3-C4. Haffertee also came in with both correct moves in the first round, and just a couple of minutes after Spork’s winning guess.

The first days of the Jamzu Daily Double 2 was fantastic, with a new winner, and the players showing extremely sharp skills in an intense and fast contest.

The positions for the Thursday Triple Twist have been posted! Good luck to all the players!

Best Move: B6-C3
– Unblocks Red and blocks Blue. (total block switch)
– Creates a completely open lane for a good run.
– Takes control of lane 6 to allow Red’s most vulnerable runner a chance to escape before it gets further blocked.

B4-C3
– Unblocks both Red and Blue, blocks Blue. (partial block switch)
– Doesn’t allow for a run of more than 4.
– Allows Blue to attack lane 6 with something like F4-D6.

Best Move: H3-C4
– Unblocks Red and blocks Blue. (total block switch)
– Good way to block Blue in open lane 4
– Red is behind in blocks, but ahead in the race. This move puts Red ahead in the block score.

Either G4 or G6
– Does remove a runner
– But Red is well ahead in the race, and neither of these runners is in any danger of being blocked, so no need to do these moves now.