POSITION THREE Red to move with a four. Even though it looks tough for Red here, Red actually won this game. 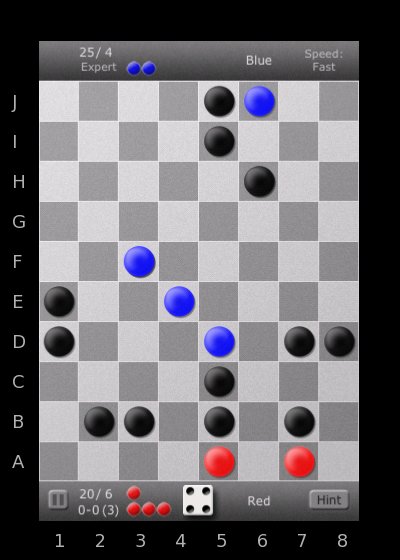 – This unblocks Red and blocks Blue.
– Starts a series of moves to clear and control of lane 5.
– This is by far the best use of a four here. You will need to unblock the jammers in I5 and J5, and if you have the chance to do this while also blocking blue, take it!
– This move holds Blue at F3, for the potential miracle roll of a 6 by Red and the following move of J5-D3.
– The jammers at B5 and C5 can be used in multiple other ways to attack block Blue. Using a four for this purpose not necessary here.

– This move does block Blue in lane 3 and unblocks Red in lane 5, but also unblocks Blue in lane 5 too early.
– Using the jammers in B5 and C5 to block Blue right now is not critical, as there will be many potential rolls that could be used with these jammers on future moves.
– This move would prevent the future miracle move J5-D3, possibly wasting a roll of 6 for Red.

Red is in a bit of a pinch here. He’s ahead in squares, but behind in blocks and sitting with two runners very vulnerable on the starting squares. From here on out, it was a heavy battle for Red to save his life. But the move I5-E3 was critical. This kept control of lane 5 for Red, preventing more damage here, and Red was able to use a subsequent roll of 6 to move J5-D3. Red also followed with multiple attacks on Blue with the jammers at B5, C5, B7 and D7. After a very big tussle, Red managed to free himself and get across for the eventual win.