POSITION SIX Red to move with a two. 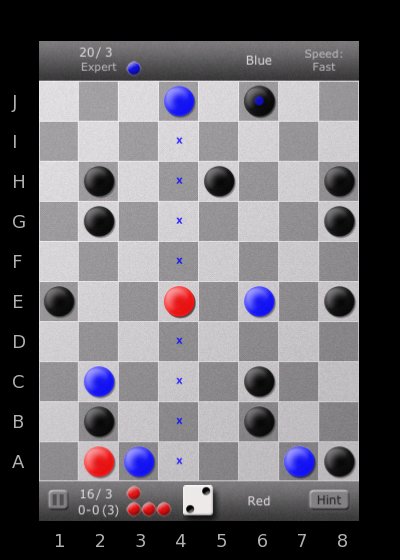 – The only way Red can block Blue.
– Red is ahead in the race, but blocks are even. Red can get a slight advantage with this block. It may be small and fleeting, but it is definitely the only way to slow Blue down here.

– E4-G4 is only just OK in this positon.
– With this move, there is a slightly better chance Red could then use G2 and H2 to block behind the Red runner on G4, but Red can also deflect those jammers backwards off the edge of the board, and potentially block Blue at D4, C4 or D6.
– It is more likely Blue will escape entirely if Red gives him an easier jump by moving E4-G4.

This position was intended to be tricky. Adding a block to Blue is really the only good option Red has here, and A8-A6 is the only shot. E4-G4 is too dangerous for Red to try now. Better to wait at least one or two more rolls for a potential 5 or 6. And if Red got a 4 next roll, he could even leave E4 in place, and block behind E4 with G2 or H2 instead.

If Blue got a good jump over G4, Red could be in some trouble if he couldn’t quickly free his A2 runner. Of course, if Blue gets a 5 or 6 next roll, Red will really have to hustle. Red’s advantage, though, is stronger than it appears, as he has already scored 4 runners. Blue has only scored one.