POSITION SEVEN Red to move with a one. 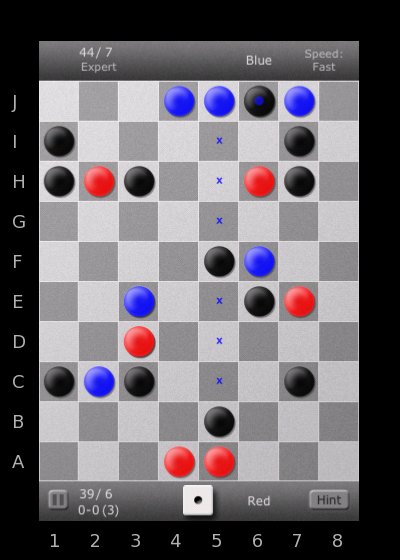 – Unblocks Red at D3 and holds Blue in place at J4. Two clear advantages with one move.
– Allows Red a good shot at a long run in lane 3, if he gets a decent roll next move. The guaranteed jump over E3 is a plus.
– Keeps Blue tied up in lane 4 for a bit. Red is ahead in the race. Why give Blue a clear shot at catching up right away?
– This move not only prevents Blue from easily catching up in the race, but by opening a full lane, and potentially moving off with a 6, could give Red an even bigger lead on his next move.

– Unblocks Red and blocks Blue.
– Gives Red some decent room to run (up to a 4)
– But not really necessary right now. Only really keeps things even in lane 5.
– If Blue decides to block lane 4 on the following move wth either C3, F5 or E6, then Red is blocked if he rolls a 5 or 6, and that roll is wasted.

The idea here is to keep Red’s position very open, with more than one opportunity to use a high roll, while still tying up Blue, at least for a bit. Red’s lane 5 runner is not in any real danger yet, so waiting on moving B5 is fine. There should be several ways to use B5 later to attack Blue, especially in lane 7.

Several players suggested C1-B2 with this roll, but this move really doesn’t really accomplish much. The C2 runner is as good as gone already, and the other two moves are both stronger right now. Letting C2 score now is no harm to Red when he has an easy score in H2, and better ways to use the roll of 1.