POSITION FOUR Red to move with a four. 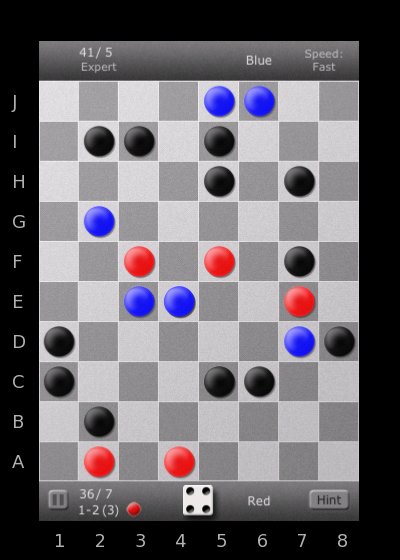 – Gets the lane 4 runner off the opening square.
– Gets the jump on Blue for an extra square.
– Maintains Red’s lead in the race.
– Red is not in any big trouble right now anywhere else, so take advantage of a good roll and get the jump on Blue to move a runner forward.
– After this move, jammers at B2, I3, and F7 can all be used to attack Blue in multiple ways, so there is no hurry to use them with this move.
– It’s fairly likely you could still block Blue in either lane 3 or 4 later with B2 or E7, so letting one go now is not a big deal, especially as Red has a decent lead in the race.
– Leaving Blue on the starting square in lane 4 is risky if Blue gets a 1 or a 3, where he could move C5-B4, blocking Red in lane 4 for more potential attacks later.

– Does unblock Red and block Blue
– But the timing of this move is not critical right now. Red’s blocks in lane 7 can be moved to block Blue in lanes 3, 4, 5 or 6 probably several ways in the future, so no hurry to do this just yet when you can get a runner off the start in a good way instead.

– Does unblock Red and block Blue from a potential long run in lane 6
– But this frees the Blue runner in lane 2 for a potentially long run and score too early.
– Better to wait a bit with this until lane 4 runner is advanced, then go after Blue with B2 in lanes 3, 4, 5, 6 or 7 later.

This was the only runner move in the contest. Red is working with a fairly open position here. Blue is also rather open, but verging into trouble in lane 5 and possibly lane 6 if he doesn’t get moving.

So Red’s best strategy is to maintain his lead in squares while removing a potential vulnerability in lane 4. Then go after Blue with the multiple jammers he can use for counterattack blocks. The timing of moves here is the important thing. Take care of a potential weak spot while you have breathing room and a good roll, and then attack when you are in a safer position.